There are two types of thrombosed hemroids:

Man distressed and in pain, typical of someone with a thrombosed hemorrhoid

In some cases, a hemroid may become compacted with blood, blood goes in, but not as much can get out, causing massive swelling and pain in the end.  If a blood clot then forms in the hemroid, then this is what is defined as a ” thrombosed hemroid “. Thrombosis literally means blood clot and it can either partially OR completely block blood flow both in and out of the hemorrhoid.

For a much more technical/biological understanding of thrombosis and hemorrhoid thrombosis, well thats a good page for that.

3… Thrombosed hemroids and their dangerous side effects

If blood flow is completely or substantially blocked then necrosis (death) of the part of the internal hemorrhoid so affected often occurs and gangrene may result in a small number of instances. Ulceration – breakdown of tissue from lack of oxygen and nutrients and the build of toxins, develops into a sore – is also a common effect in thrombosed intenal hemorrhoids. There is a tiny risk of septicemia – blood poisoning – as well.

If the thrombosed hemroid is only partially blocked, then enough oxygen may get through to keep things going, but it’s not pleasant and, it is certainly ripe for infection in apparently a small number of cases.

A thrombosed internal hemroid is part of a vicious cycle

Here’s the crunch though, the thrombosed internal hemroid mainly occurs due to reduced blood flow through the hemroid, but the thrombosis – blood clot – that forms in the hemroid restricts blood flow even further, potentially causing much severer symptoms and potential consequences – hence they often get our attention very well.

Acute distress is a pretty good symptom summation when you have an internal thrombosed hemorrhoid:

If you were to look or ask someone else to look, you would likely see a bulging lump of material coming out of the anus (not growing from the rim of the anus, actually coming through the anus) and perhaps covering the anus completely. most likely it would be a dark red, dark blue or black color. It would most likely look tight and swollen and feel the same way if felt or touched with your hand.

Your thrombosed internal hemorrhoid may look a bit like this hemorrhoid in this photo below, note the tight hard swollen look, how enlarged it has become: 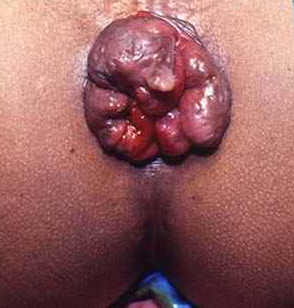 If your doctor doesn’t have the expertise to deal with your thrombosed hemorrhoid via hemorrhoidectomy, he may send you home or keep you in the hospital, ask you to take sitz baths, get bed rest, apply wrapped up ice packs, give you pain killers – either oral, injection, or intravenous – and suggest ways and means to avoid constipation, such as a high fiber hemorrhoid diet and the use of laxatives forconstipation.

If the doctor has the expertise in dealing with thrombosed internal hemorrhoids, then a hemorrhoidectomy for internal hemorrhoids will most likely be performed. The better one apparently being the scalpel, with wound areas stitched closed, conducted under local anesthesia, with you laying on your side in the “jack knife position” – knees pulled up to your chest or thereabouts.

However, most thrombosed hemorrhoids will clear up of their own accord, with the blood clot reabsorbed back into the body. How to treat hemorrhoids provides three products with pain killers, which may assist with the immediate pain relief need and help your body to heal itself and get rid of hemroids. BUT, if you are offered an operation, it is possibly best to take the doctors surgical suggestion.